Home latest news JP TOP LEADERS WARNS UHURU WILL END UP LIKE MUGABE
President Uhuru Kenyatta should step down as his stay in office is illegitimate. 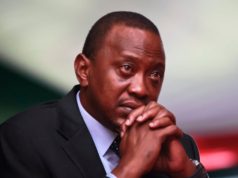 Uhuru’s former ally and defunct TNA boss Onyango Oloo said in a scathing attack against the Jubilee leader that it was time for the will of the people to be respected.
In a video posted online by the Daily Nation and seen by exposeke.com ,Oloo said that he was offering advise to a friend, Uhuru.
He warned Uhuru that he would receive a bitter pill should he cling on power and should he be caught in the wake of such a revolt.

“The only thing that I would like to inform and warn my former friend Uhuru Kenyatta is that please beware; revolutions do not come wholesome, revolutions come in piecemeal. And the last person to be served this portion is usually the king and he is always served a very bitter pill
.

Remember this revolution is being served in doses. if i were you, i would be careful, I would heed to the people’s demands,” he said amid cheers of approval from NASA supporters.

Oloo was an ardent supporter of Uhuru Kenyatta and was seen as a pillar for Jubilee by virtue of coming from Raila Odinga’s stronghold of Luo Nyanza.
He ditched Uhuru for Raila ahead of the August 8 elections as tribal politics dictated the fate of many politicians and how they aligned themselves.
Earlier, NASA supporters had viewed Oloo as a traitor and after his defection, Jubilee supporters termed him as having been a Raila mole in Jubilee.
He is the current Kisumu County Assembly Speaker and a strong champion of the resistance movement sponsored by the opposition.
NASA does not approve of Uhuru’s administration and only recognise Raila as the ‘people’s president’
.
Through the proposed People’s Assemblies, the opposition hopes to make Uhuru unpopular and thereby dethrone him from the presidency.
Several NASA controlled county assemblies have already embraced the people’s assemblies
.