Home latest news MUDAVADI BLASTS JUBILEE FOR SPREADING PROPAGANDA ABOUT HIS DEFECTION TO JP
National Super Alliance (NASA) co-principal
Musalia Mudavadi has dismissed claims that he has been meeting with emissaries from the Jubilee Party to discuss a move from the Opposition. Speaking on Thursday, the Amani National Congress (ANC) party leader strongly affirmed that neither he nor Wiper boss Kalonzo Musyoka is contemplating defection.
“There is no truth in that. That is cheap propaganda,” Mr Mudavadi dismissed.

He emphasised that there are no plans to hold any such talks with the ruling party adding that it would be counterproductive to the NASA agenda.
“We have not talked to anyone from the Jubilee Party. Neither do we intend to hold any discussions with them in the near future. Any meeting with Jubilee at the moment would be of no use as it will not achieve anything positive for the country.
“Why would anyone want to talk to Jubilee at this point in time. It would be counter-productive to enter into any discussions at the moment.
We had suggested that we talk about electoral reforms before October 26 but they declined. Why would we be the ones now willing to talk to them?” the NASA leader was quoted by Media Max .
He further lashed out at religious leaders who have championed talks between the two political sides stating that the time for talks had elapsed.
“Where have they been all along? To tell us to talk to Jubilee now is not possible. That chance has long been lost,” he stated.
Mr Mudavadi remained in the country as former Prime Minister travelled to Zanzibar while
Bungoma Senator Moses Wetangula flew to Germany to support Kalonzo and his ailing wife.
The Opposition will hold a fundraiser for victims of violent protests on Friday ahead of a major announcement scheduled for Saturday
.

RELATED  Wamalwa warns Raila after being chased like wild dog 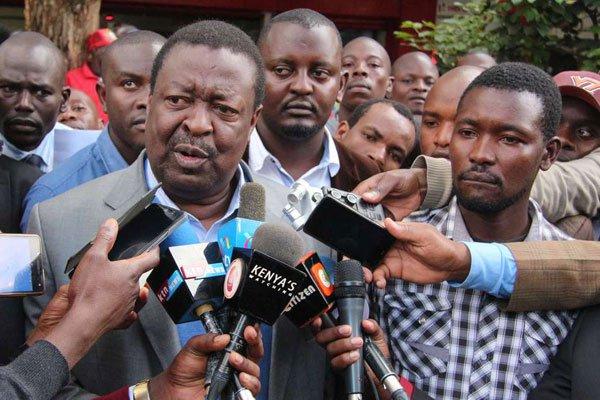