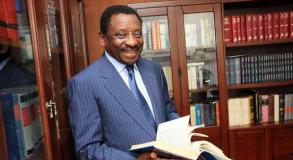 Siaya Senator James Orengo on Wednesday landed a new position in Parliament.
Mr Orengo was selected by National Super Alliance (NASA) MPs as the Deputy Minority leader of the Senate.
Senator Orengo will be deputy of NASA co principal Moses Wetangula who has been picked as the Senate Minority leader.
He is among other NASA parliamentarians who have secured positions in both houses of Parliament.

Orange Democratic Movement (ODM) Chairman John Mbadi has been picked as the National Assembly minority leader deputised by Kathiani MP Robert Mbui .
John Mbadi
Suna East MP Junet Mohammed and Makueni Senator Mutula Kilonzo were selected as the Opposition Minority whips in the National Assembly and Senate respectively.
They will be deputized by Kiminini MP Chris Wamalwa and nominated Senator Petronila Were.
NASA submitted its House leadership members on Wednesday morning when Parliament resumed its sittings after a three-week break.
The list was sent to National Assembly Speaker

Justin Muturi for approval.
The National Assembly convened in the morning while colleagues in the Senate met later in the afternoon.
Moses Wetangula and James Orengo
Following their recess, the legislators are expected to look into many things including the county allocation of revenue before breaking for the Christmas holidays.
They are also expected to form the Appointment
Committee that will vet Cabinet Secretaries when President Uhuru Kenyatta names nominees to his cabinet.