Home latest news TOP USA OFFICIALS IN COLLABORATION WITH RAILA,POLLS WERE NOT HELD
Opposition leader Raila Odinga’s quest for electoral justice may no longer be a political rhetoric at least based on Mark Bellamy’s words during a public forum in US. 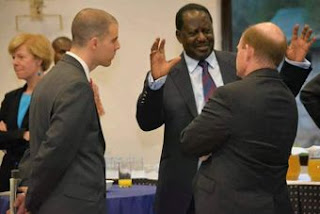 For many months now, the country is in deep political turmoil as more people continue to perish due to standoff between Odinga and President Uhuru Kenyatta.
“Kenyans have shown that they do not accept authoritarianism or strongman rule prevailing in many parts of Africa,” he said as quoted in Odinga’s speech excerpt delivered on Saturday.
Bellamy, a former Kenyan Ambassador at one time served as Director of African Affairs in State Department and is one of key advisors on African matters.
He further said: “Kenya is therefore in political disarray. A sizeable portion of Kenyans do not accept the legitimacy of October elections because they do not offer solution to current crisis.”
For the second time, Supreme Court of Kenya will be making a crucial judgment on Monday following two petitions challenging Uhuru’s victory.
So far, only few countries have recognized Uhuru’s landslide victory in an election that was boycotted by Raila Odinga.